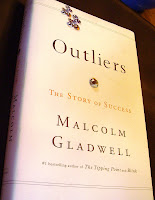 I'm very excited to be attending NECC in Washington, DC for the first time at the end of June. In preparation for this conference, I have been reading Malcolm Gladwell's book Outlier. Gladwell will be a keynote speaker at NECC and I wanted to know more about him before I saw him at the conference. I find it exciting to know that a British born Canadian journalist is a keynote speaker at such a large American conference.

If you want to know more about this book, Amazon you can read the description on the Amazon website. Amazon has also included two videos from Gladwell on their website. Video 1 and Video 2. I always find it interesting to hear authors talk about their books.

Two concepts that Gladwell discusses in his book that I found to be thought provoking are:

"The Matthew Effect"
Gladwell shares his theory about why people are successful. His theory is that people aren't just successful because of their merits, but more simply because of what time of year they are born. He calls this the Matthew Effect. This advantage stems from the arbitrary dates our society uses to make up such things as sports teams or when a child can enter Kindergarten. Children born just after the cut-off date are retained a year before entering school or starting a sport. Afterwards, they are considered more talented or able when in fact they are simply more mature.
10,000 hours
Gladwell presents an interesting case using famous examples of people such as the Beattles and Bill Gates to explain how long it takes to master a skill before you can be considered a real talent. These bands or people were not overnight discoveries, they were people who practiced their craft over 10,000 hours before they were "discovered". Through this practice, they are considered to be masters of their craft. For people like the Beattles and Gates, they happened to have put in the practice time soon enough to demonstrate their skills at the right time. Not only talent, skill and practice contributed to their success, but timing and circumstance as well.
These are only two of the ideas that Gladwell talks about in his book. I found the entire book to be food for thought and encourage everyone to read it. You will be talking about it for years to come if you do!
Posted by Unknown at 7:49 PM